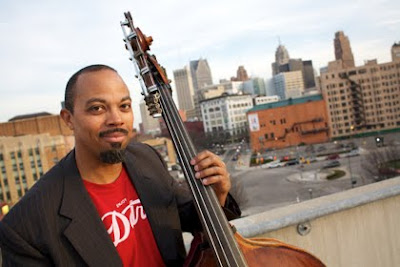 Personal Motto: Life is short when it’s so good.

Rick “Mr. CutTime” Robinson, a double bass player, has had a diverse and active career. He performed as part of a major symphony orchestra, launched the Detroit chapter of Classical Revolution and now owns and operates a company for digital music printing and arrangement.

How did going to CIM affect you as a musician? As a person?

Learning with Cleveland Orchestra musicians helped me visualize and realize my goal to join a major symphony orchestra. This included encouragement to work in the regional orchestras in Canton and Akron. In that environment, I learned that music without direction and phrasing is a waste of time.

Who are your heroes, musical or otherwise?

They are Larry Angell for always focusing on the music and the audition excerpts; Gerhardt Zimmerman for making every performance matter; Carl Topilow for sharing all the practical tricks and considerations of an orchestra including auditions and conducting. And trumpet major Randy Quast, who turned me on to jazz, which I really enjoy even though I never studied it. This made me want to play classical in clubs.

If you had not chosen music, what else might you have done with your life?

This is extremely difficult to answer.  I might have gone into theater or psychology.

Please tell us about your life now as a musician and educator – what makes you unique? And what are your hopes for the future?

After joining the Detroit Symphony (DSO) in 1989, I began transcribing nearly one hundred symphonic works for my two small ensembles. And later, I began composing funky-romantic works for the string sextet… all for the purpose of reaching out to distant communities that don’t attend DSO concerts. Then I discovered Classical Revolution and launched the Detroit chapter of this movement to begin reaching the community around Orchestra Hall (which is profoundly alienated from classical.)

I quit Detroit Symphony last year to go all the way…serving a practical, social mission of sharing the beauty, power and entry points of classical music with curious music lovers. I understand concert traditions, but I also understand why most Americans don’t. And now that we have banned indoor smoking in most states, there is no reason why classical can’t go casual in bars and clubs to introduce, complement and build audiences for traditional concerts. Before I end my playing career for more arranging, composing and conducting, I want to tour and record CutTime ensembles while pioneering New Classical presentation formats. (More info available at cuttime.com)

Anything else you’d like to add about your time at CIM or Cleveland in general?

I had the idea for CutTime at CIM when I first played The Soldier’s Tale by Igor Stravinsky. I’m also grateful for Guy Dean and Gene Roy’s classes in harmony, counterpoint and sight-singing because I use that knowledge every day professionally.