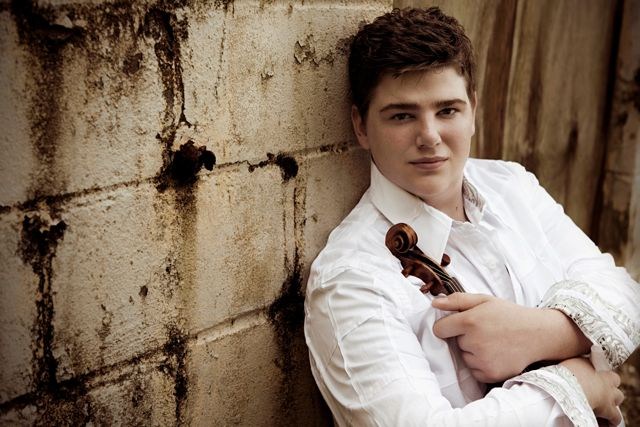 CLEVELAND, OHIO (May 1, 2013) The Cleveland Institute of Music (CIM) congratulates rising violinist Chad Hoopes on being a recipient of the 2013 Cleveland Arts Prize Emerging Artist Award.

Hoopes, a student of CIM President Joel Smirnoff, is a high school senior who began studying in CIM’s Young Artist Program in 2007. He began his violin studies at the age of four in Minneapolis, MN.

"On behalf of the Cleveland Institute of Music, I warmly congratulate the important young violinist, Chad Hoopes, on the announcement of his receipt of the 2013 Cleveland Arts Prize for Emerging Artists," said President Smirnoff. "Mr. Hoopes has achieved a great deal in his brief time on this earth and is very much a product of Cleveland, of the Cleveland Institute of Music and of University School. He demonstrates the value of lyricism in a tough world and does it graciously, yet powerfully through his violin. Mr. Hoopes has already and will continue to represent Cleveland and its rich musical community throughout the world which he travels in its entirety and I congratulate the Cleveland Arts Prize for recognizing an important, young world talent, nurtured by the artistic world of Cleveland."

The Cleveland Arts Prize is the oldest award of its kind in the U.S. and recognizes excellence in the visual and performing arts from emerging and mid-career artists. Hoopes is one of five artists honored this year from a field of more than 100 nominations.

Hoopes has appeared with numerous ensembles throughout the world since winning first prize in the Junior Young Artists Division of the Yehudi Menuhin International Violin Competition in 2008. His exceptional talent and magnificent tone are acclaimed by critics worldwide. Hoopes is a violinist possessing vibrant virtuosity "with an inspiring blend of emotional expression and technical ease" (Press Democrat). During the 2011-12 season he was the third Artist-in-Residence at Classical Minnesota Public Radio. As part of MPR's Artist-In-Residence program Hoopes played concerts throughout the greater Minneapolis/St. Paul area and participated in and led educational activities at local schools. At each school he spoke about the importance of music and the arts, and was joined by Classical MPR host Steve Staruch.

Beyond the concert hall, his virtuosity and exuberant personality have been featured on the CBS Early Show, NBC affiliate station WKYC (Cleveland), NPR station WCLV in Ohio, ABC affiliate station KSTP Twin Cities Live, and on PBS's From the Top: Live at Carnegie Hall. He was the soloist on the Emmy Award-winning June 2007 television commercial for the Cleveland Indians produced by SportsTime Ohio Network, which aired on NBC on SportsTime Ohio and on ESPN.