Love, loyalty, jealousy, scandal, betrayal and even death (well, almost) play a role in the CIM Opera Theater's modern interpretation of Mozart’s La Clemenza di Tito (The Mercy of Titus).  Cleveland Classical’s Mike Telin spoke to three of the cast members all of whom shared insightful thoughts about their complex characters within Mozart's ancient Roman opera.

Mozart’s La Clemenza di Tito (The Mercy of Titus) was Mozart’s final opera, composed just after The Magic Flute, and shows the composer at the height of his powers. It was commissioned to celebrate the coronation of Leopold II, Holy Roman Emperor, as King of Bohemia. So, while certain universal (and popular opera) themes like love, betrayal and forgiveness all play a role in this work, Tito is centered more on worthiness, leadership and responsibility. 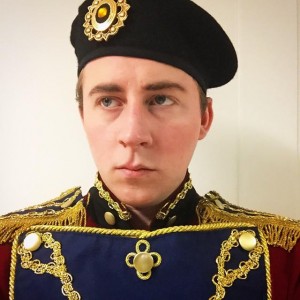 The title character, a stand-in for Leopold II, represents the “ideal leader.” All he just wants is to do right by his people and marry the women he loves. Unfortunately, his Princess Berenice is not the people’s ideal choice for their leader. To avoid a scandal, Tito (Brian Skoog, pictured, and Kevin Adamik) is forced by the people he governs to give up the woman he loves and begin a search for a more “politically acceptable” bride.

This is where the opera essentially begins.

We meet Vitellia (Angela Kaso and Laurel Weir), a woman bent on revenge, and Sesto (Elizabeth Frey, pictured and Erika Rodden) the man who loves her and Tito’s friend and confidant. When Vitellia plots against their leader and manipulates the adoring Sesto to act on her behalf, he's torn between love and loyalty. Ultimately, Sesto chooses love…and betrayal. When the plot against Tito fails and Sesto is arrested, the noble leader must determine whether or not he’ll show his former friend and confidant mercy.

“The backstory – though not the opera – is reasonably historical,” says Bamberger. Emperor Titus Flavius Caesar Vespasianus Augustus of Rome (Mozart’s Tito) fell in love with Judean princess Berenice while suppressing the Jewish revolt in the land of Israel. He brought Berenice to Rome intending to marry her, but the public reaction against the idea of a foreign queen was so fierce that he had to send her away and never married.

This might seem like “ancient history” but that’s not the way Bamberger sees it, citing public emotions that are fueled and inflamed by constant news updates, social media and the like can lead to condemnation of even the most well-intentioned political leaders.

“The difficulty of governing while others are working for their own ends…it all seems very contemporary,” says Bamberger. “That’s how we show it. And love has very little to do with it.”

The two-act opera is dual cast and sung in Italian with projected English translation provided.