"From the moment Ivan Zenatý and Sandra Shapiro walked onstage at Mixon Hall on Wednesday night, it was clear that the audience was in for something special," begins a Cultured Cleveland review, authored by longtime journalist and cultural writer Frank Kuznik.

The December 4 Faculty Recital is the first time Zenatý and Shapiro have performed together at CIM and was Zenaty's Cleveland debut, as well. The recital came just days after the duo returned from a series of six concert dates in the U.S. and Europe.

Calling the artists "the picture of sophisticated elegance" as they took the stage before a nearly full house, which included many appreciative students, Kuznik is quick to add that "their music was even more impressive" (than their formal wear).

"The caliber of the music they play together is world-class, though in some ways their recital was equally interesting as a demonstration of how to play duets," the review continues. "He and Shapiro have distinct voices that fit together seamlessly when they play, matching surges of expression and nuances of phrasing and tone, or opening up space for each other to dash off a dazzling line. Their sound is airtight and commanding, with sharp, precise beginnings and endings on every piece." 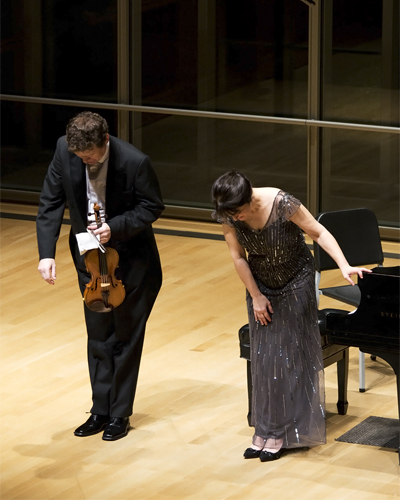 The review elaborates on the precision and artist execution of each piece performed, as well as noting the audience's exuberant response--prompting four encores.