Classical Improvisation and the Cadenza with Marshall Griffith at CIPC 2013

A long-time supporter of the Cleveland International Piano Competition, CIM and our musicians play our part in the CIPC’s 2013 Festival Events. Recently, CIM alumnus, faculty member and improvisational pianist Marshall Griffith participated in a discussion and demonstration held in the Recital Hall at the Cleveland Museum of Art as part of CIPC 2013. 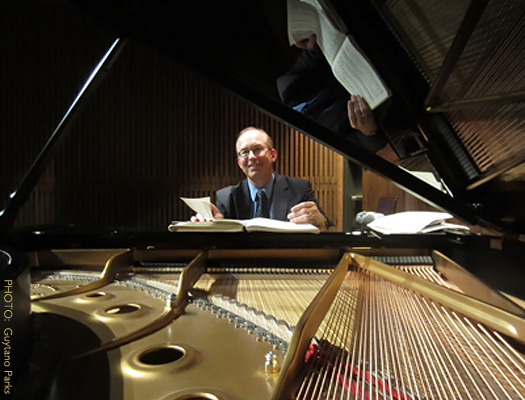 Mr. Griffith discussed how customary it was in Mozart’s time for a performer to not only improvise a cadenza during a special moment in a concert but to add notes throughout as the soloist rarely had a completely written out part, reported Guytano Parks in an article for ClevelandClassical.com.

Additionally, Mr. Griffith acknowledged that the thought process of performers of that era and today’s jazz musicians shared a similar thought process related to improvisation.

“So, much like the artistry and creativity of today’s musicians who speak the language of jazz, performers in Mozart and Beethoven’s day were likewise equipped with elements of their Classical language, delighting and dazzling audiences with their technique, individuality and inventiveness,” wrote Mr. Parks. Mr. Griffith demonstrated some of his points performing excerpts from Scarlatti and Mozart.

This isn’t Mr. Griffith’s first appearance this year at CIPC; his trio brought a bit of the “language of jazz” to the opening reception on July 31, which was also hosted at the museum in their spectacular atrium.

To read an entire review of the event, visit ClevelandClassical.com.