This concert, conducted by Carl Topilow, at the Home of The Cleveland Orchestra is the first in the CIM@Severance Concert Series for the 2013-2014 academic year. The evening begins with Fireworks—literally Stravinsky’s Feu d’artifice, Op. 4—a dazzling overture that launched the composer’s career and is immediately followed by the Tchaikovsky work featuring Paik.  After a brief intermission, the Orchestra returns to complete this all-Russian program with Rachmaninoff's vigorous Second Symphony. 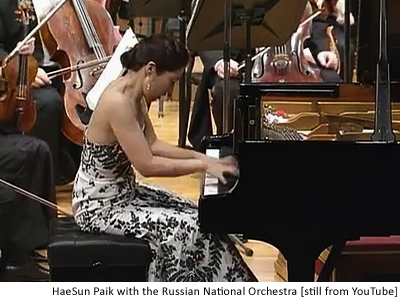 Paik, who performs as a chamber musician as well as playing solo recitals, has appeared as a guest artist with some of the world’s premier orchestras including the Boston and London symphonies, the Munich, Tokyo, Warsaw and Moscow philharmonics and the Russian National Orchestra—just to name a few.  Lucky for us, in this technology driven age, some of these appearances have been captured on video and can be found online, such as her 2007 performance of Rachmaninoff’s Piano Concerto No. 3 with the Russian National Orchestra under the baton of conductor Mikhail Pletnev in the Korean Art Centre Concert Hall [video].

Paik, once the youngest pianist of her generation to be appointed as a music professor at Seoul National University where she taught for ten years, is now a member of the CIM piano faculty, an Artist-in-Residence at Catholic University of Daegu and the Artistic Director of the Busan Music Festival in Korea. If that wasn't enough to keep an artist busy, she recently participated as a juror for CIPC--the Cleveland International Piano Competition.

Although this is Paik's first semester (which began in late August) at CIM, she is already building a wonderful rapport with her students and colleagues.

If you would like to see HaeSun Paik with the CIM Orchestra at Severance Hall at 8pm on Wednesday, October 9, tickets begin at $5 and can be purchased by calling the Severance Hall Box Office at 216.231.1111 or visiting clevelandorchestra.com.