Cleveland Institute of Music Preparatory division alumnus Chad Hoopes has been making a name for himself for close to a decade--quite an accomplishment for a 19-year-old. Recently, he released his first studio recording of concertos by Mendelssohn and John Adams to rave reviews, and now he's the cover story of Strings magazine.

A Preparatory student who received private instruction first from David Cerone and then Joel Smirnoff at CIM, Hoopes' career to-date includes a number of prestigious awards (including the 2013 Cleveland Arts Prize) and competition wins, a myriad of performances with orchestras around the world, a new CD and a year (2011-12) as Artist-in-Residence for Minnesota Public Radio. 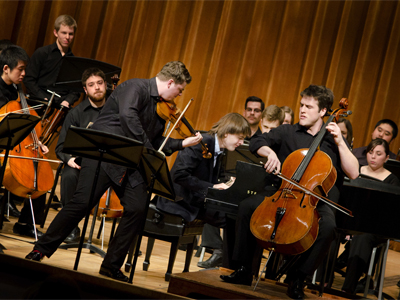 In the August 2014 issue of Strings, interviewer David Knowles shares some insights into this talented young artist, who "shows a command of his violin that is well beyond his years." You can read the interview online by visiting allthingsstrings.com.