Be the future of classical music. This is the call to action, the rallying cry for all those who are part of CIM. And it’s no small thing, this charge to faculty, students, and staff: Your voice matters. Use it to define classical music for today, tomorrow, and generations to come.

But how does CIM—one of just seven independent conservatories in this country—identify and attract those change-makers, the best and most talented young musicians across the globe? And how does CIM stand out to a prospective student who is just beginning to consider all the options for undergraduate or graduate study?

The secret lies with the CIM approach to admissions—an eighteen-month-long process carefully calibrated to reach the world’s top music students while giving them a personalized look at the inner workings of the conservatory.

A Music-Centered Community, a Student-First Approach

When young musicians begin thinking about attending a conservatory, CIM faculty and alumni are often the students’ first and best introduction to CIM. Some students have long admired faculty members’ work as part of orchestras or other ensembles. Others train under CIM alumni working in the field. In the case of Bella Lorenzo-Giguere, a cellist who was just accepted into CIM’s Class of 2022, she first heard about CIM through her private cello teacher in Washington, D.C.

“My teacher told me about Richard Weiss,” she says. Weiss, who serves as first assistant principal cello for The Cleveland Orchestra, co-heads the cello faculty at CIM. “I wasn’t even thinking about conservatories, but because of my teacher’s recommendation, I wanted to apply to Mr. Weiss’ studio.”

Other prospective students get wind of CIM by attending music festivals and institutes that feature CIM faculty. Every interaction between a student and CIM is an opportunity to build and nurture a relationship between the two. This relationship is crucial to giving students an up-close-and-personal look at what CIM has to offer.

“CIM takes great pride in admitting the very best student musicians in the world,” says Jerrod Price, CIM’s associate dean of admissions and enrollment management. “But of course, to make it to the point where you’re even considering CIM, you are already at an extremely high level. Every one of the students we admit demonstrates musical excellence, adds value to the music world, and we think they would make a great contribution to the CIM community.”

To develop deeper relationships with prospective students, CIM has evolved its admissions process to be simultaneously more transparent and more welcoming. Even before students set foot on the CIM campus, they have many chances to get a closer look at what the conservatory is all about. CIM sends out mailings and engages on social media throughout the summer, ramping up to a video each week during the fall. A series of “Day in the Life” videos, posted online via social media outlets, gives students a glimpse of the day-to-day schedules of CIM students—inside and outside of the practice room. Other videos showcase tips for excelling on audition day and how to record an audition video for December’s pre-screening.

“I first learned about CIM through my teacher, but I really got to know more through their social media posts,” says Lorenzo-Giguere. “The videos really set them apart from other schools I was considering… and they made everyone at CIM seem so relatable—I could definitely see myself fitting in with these other musicians!”

By the time students submit their applications and video auditions on December 1, they’ve had many opportunities to interact with CIM. “We really try to make the whole process a window into life here at CIM,” says Price.

It’s the most important day in the entire application process: Audition day.

Those who’ve passed the pre-screening stage in early December are invited to an in-person audition in February. Students come from thousands of miles around to Cleveland—or one of CIM’s satellite audition sites in cities like Shanghai, New York City and Interlochen, Michigan—to perform for a panel of CIM faculty members.

But CIM strives to ensure that audition days are about much more than this crucial performance. Throughout the day, students have many opportunities to get to know CIM and the surrounding neighborhood: interacting with current students, touring campus, visiting nearby restaurants and attractions, and even dining with faculty members. 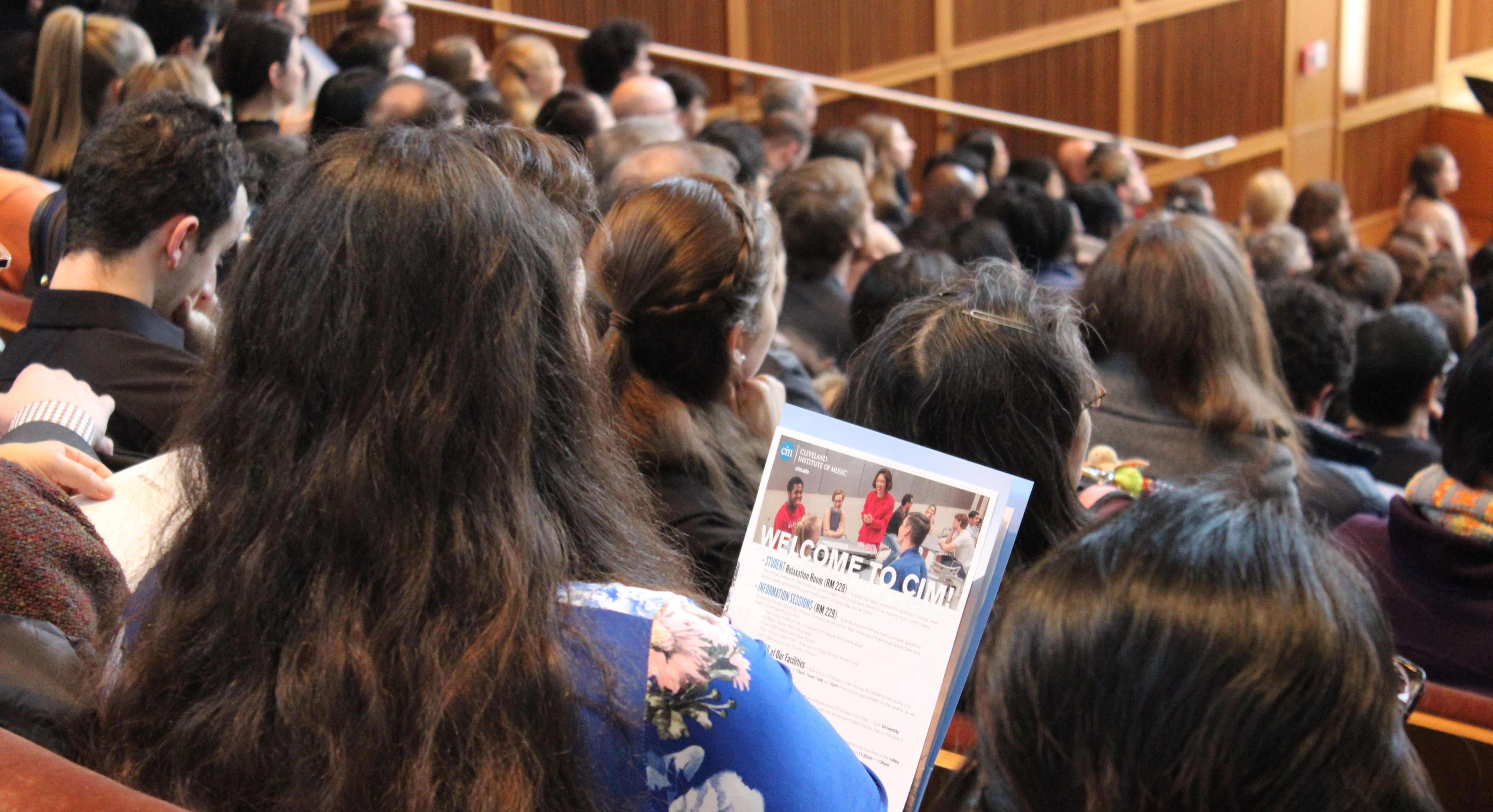 “After my audition, I spent some time with a friend who’s a CIM freshman and several of his classmates. I had lunch with Richard Weiss and another faculty member. I went on a tour of the campus. I got to meet and talk to a lot of different people and everyone was really enthusiastic about CIM,” says Lorenzo-Giguere. “It was such a unique opportunity. It was so different from any of the other schools I visited—I really got a sense of the CIM community.”

Student volunteers play a huge role in audition day, from setting up, to guiding students to their practice rooms and audition studios, to offering a helping hand throughout the day. This is part of CIM’s effort to be both welcoming and transparent. What better way to get to know your prospective school than to interact with your prospective peers?

We Are Pleased to Offer You Admission

In mid-March, CIM sends out offer letters. This year, just under 400 of the 1,200 applicants were invited to join the incoming class. Of that group, an anticipated 150 will matriculate to CIM.

Choosing the best students from a very competitive applicant pool is difficult for CIM, but it comes down to two factors: musical skill and ability to succeed. CIM faculty and enrollment team want to see that students can produce a beautiful sound, on time and in tune, and that they have something to say musically. But just as important is the sense that students will excel at CIM. “We are really gauging whether students can find success at CIM,” says Price. “We want young musicians who are going to thrive.”

For students, the decision often comes down to the factors that differentiate CIM from the country’s other elite music schools and conservatories.

At CIM, music comes first. There’s no taking a backseat to athletics or any other department. Music is CIM’s focus and purpose and passion.

CIM has a unique relationship with Case Western Reserve University. CIM students have the advantage of getting a world-class liberal arts education for all their non-music classes.

CIM sits in the center of a music-rich city. The world-class Cleveland Orchestra performs at Severance Hall, right up the street from CIM. The Rock and Roll Hall of Fame and Museum is minutes away. And you can experience music of all genres at a wide variety of venues, from the House of Blues to Blossom Music Center to the Agora Theatre and Ballroom.

CIM students have ample opportunities to perform – while serving the community. An active presence in the community, CIM presents nearly 600 performances annually, most free to the public. Students collaborate with local institutions including the Cleveland Museum of Art, the Cleveland Museum of Natural History, and The Cleveland Orchestra. Students also teach and perform throughout the region, bringing music to schools, senior centers, hospitals, and beyond through live and video-conference programs.

CIM graduates have strong futures in music. There’s no doubt that CIM prepares students for careers in music. CIM alumni are world-class soloists, acclaimed vocalists, and groundbreaking composers. CIM graduates belong to virtually every major orchestra in the world—in fact, fully one-third of the members of the world-renowned Cleveland Orchestra went to CIM! “When you leave CIM, you’re going to have the skills and abilities to do whatever you want to do,” says Price.

The CIM community is second to none. “We have all the advantages of conservatories on the coasts with a Midwest mentality,” says Price. CIM is a close-knit, collegial environment where like-minded people enjoy music together. Students inspire and support one another, and challenge each other to become better, stronger musicians.

And, of course, there’s also CIM’s emphasis on chamber music… The new Center for Innovative Musicianship, which helps guide students toward meaningful, achievable career goals… Eurhythmics coursework that teaches students to develop their natural instinct for rhythm… And so much more.

The Future of Classical Music

At the end of each admissions cycle, CIM welcomes a new crop of highly talented young musicians into the CIM community. Everything about the admissions process—from that first connection to audition day—is designed with the student in mind. And that’s because CIM takes such a long view of the value each student brings, not only to CIM but to the world of classical music.

“CIM students are future musicians, composers, academics, all with the potential for a long and satisfying career in music,” said Price. “But they are so much more than their instruments or their skills. They are the future of classical music. They are shaping—and will continue to shape—how the world listens to, interacts with and responds to music. They have incredible power and importance in the music world, and we want to help them achieve every last ounce of their promise and potential.”