Though singer Edith Piaf and classical composer Francis Poulenc never met in life, concert pianist and CIM faculty member Antonio Pompa-Baldi has brought the two together 50 years after their deaths with his new release: The Rascal and the Sparrow. 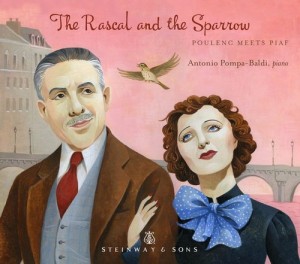 Inspired largely by Poulenc’s Improvisation #15 'Hommage a Edith Piaf' for solo piano, the pianist played "posthumous matchmaker" by wedding the works of these two musicians in The Rascal and the Sparrow. Poulenc’s 'Hommage' may have provided the bridge by which Pompa-Baldi connected the two seemingly disparate worlds of Piaf and Poulenc but, he says, the two "have more in common than may meet the ear."

"I believe they share some significant traits, as musicians and human beings. True, they came from completely different backgrounds—Poulenc from a well-to-do family, Piaf basically born on a street corner—but their astonishing musical talent expressed itself best through songs. They had a powerful way to express emotions and touched lives by means of incredibly beautiful melodies. The divide between classical and popular is not so important here, nor so marked in my opinion. The idea of pairing them together comes from one certainty: Poulenc knew a lot of Piaf songs well, and loved them."

And, a happy musical marriage he has made with the album! While The Rascal and the Sparrow wasn’t available for purchase until Tuesday, September 24, it gained traction with airplay on Cleveland’s 24/7 classical music station, WCLV 104.9 FM, well in advance of its official release.  Promoted as the station's "Choice CD" in the weeks leading up to album's release, it was also one of five favorite CDs offered as a donation thank you gift package in the WCLV's Fall Pledge Drive, which ran September 6-15, 2013.

Read more of his interview on NPR.org and enjoy excerpts from the recording, Pompa-Baldi’s first on the Steinway label.