The Cleveland Institute of Music adds composer/virtuoso Robert Mann to our illustrious list of Honorary Doctorates at the 89th Annual Commencement Ceremony on Saturday, May 17, 2014, in the Conservatory's Kulas Hall.

CIM President Joel Smirnoff will confer more than 130 Bachelor and Master of Music degrees, Doctoral of Musical Arts degrees, Artist Certificates, Artist Diplomas and Professional Studies Diplomas upon the 2014 graduates at a ceremony that will also present the legendary violinist and composer Mann with an honorary doctorate.

"With his enterprising spirit, his persistence, his talent and his resultant success, violinist and composer Robert Mann proved that American-born string players could compete with those of Europe,” said Smirnoff. “His creation, the Juilliard String Quartet, was to be a strong performing and teaching influence that gave birth to and counseled generations of young string quartets. Mr. Mann, with his gifts for playing, teaching and for the art of chamber music, provided the ultimate example of the searching, multi-talented complete musician who could both play and compose. My 11 years as his second violinist were the happiest musical years of my life. It will be our honor to bestow upon Robert Mann the Honorary Doctorate at this year's upcoming commencement.”

Mann has been a driving force in the world of music for more than seventy years. As founder and first violinist of the Juilliard String Quartet, and as a soloist, composer, teacher and conductor, Mr. Mann has brought a refreshing sense of adventure and discovery to chamber music performances, master classes and orchestral performances worldwide. He is, in the words of Richard Dyer of the Boston Globe, "one of the country's most admired and deeply loved musicians." 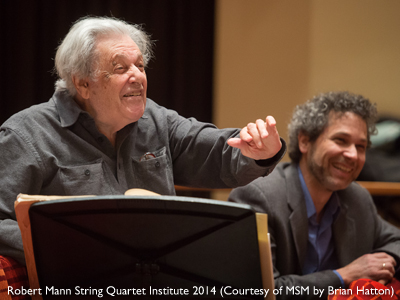 At the age of 93, Mann continues to perform as a violinist recently performing concerts and is on the faculty at Manhattan School of Music in New York. For the past two years, he has presented the Robert Mann String Quartet Seminar at the school bringing the country’s most talented young string quartets to the school for intensive week-long coachings.

Although the 2014 Commencement Ceremony at CIM is NOT open to the public, it will be streamed live online beginning at 10am EDT at http://new.livestream.com/cim.

About the Cleveland Institute of Music

The Cleveland Institute of Music, founded in 1920 with composer Ernest Bloch as director, is one of only eight independent conservatories of music in the United States. Currently, hundreds of CIM graduates play important musical roles in our world: as composers producing meaningful new repertoire, as eminent instrumental and vocal soloists, as world-renowned chamber musicians and as members of premier orchestras around the globe. More than half of the members of The Cleveland Orchestra are connected to CIM as members of the faculty, alumni, or both.  CIM is an educational and performance resource for the community, working in close association with The Cleveland Orchestra, Case Western Reserve University, the Cleveland School of the Arts, University Circle Inc. and other cultural and educational organizations towards increased access to great music, great musical performance and the highest level of music pedagogy. All CIM students participate in the rich curriculum of the joint music program with Case Western Reserve University while benefiting from access to CIM's world-renowned visiting artists and conductors, and from intensive study with CIM's stellar faculty. Visit cim.edu for more information.

The Cleveland Institute of Music is generously funded by Cuyahoga County residents through Cuyahoga Arts and Culture.