Baltimore-native David Fair came to CIM to study opera with Clifford Billions—something this talented tenor would not have been able to do without the assistance of donor-supported scholarship funds. An opportunity in the spring of 2012 offered David an expanded perspective of his potential career path. 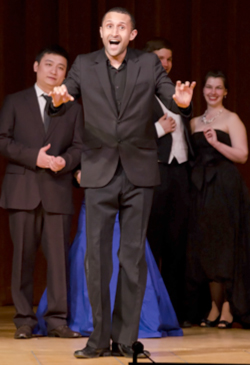 It was while finishing up his Professional Studies Diploma last spring that  David began participating in CIM’s community outreach efforts and gained a new perspective—and passion. He was tasked with working with choir students from the Cleveland School of the Arts (CSA) in preparation for a CIM “Celebration of Community” concert at Severance Hall on April 17, 2012.

“Working with the CSA students has changed my life,” he says almost apologetically, knowing full well how cliché it sounds.

Beyond the practical matters of gaining important experience and honing his private lessons techniques, he discovered a passion for teaching. A passion that excites him, knowing that teaching is about more than “just paying the rent,” and one so rich that he knows he won’t give it up even as he continues pursuing a performance career.  Additionally, he says that teaching has informed his professional growth as he prepares for auditions across the country.

“Teaching helps me hold myself more accountable to perfecting my craft. If I expect it of my students, I must demand it of myself.”

David’s love of opera and performing is apparent from the minute his foot hits the stage, as evident in his CIM opera debut in the title role of Handel’s Xerxes in November 2010. David chose CIM because, in his words, “It felt like a place where I could flourish—a place I would be supported.”

And flourish he has! Since his Xerxes debut, he has sung other major roles at CIM—including Edwin in Trial by Jury, Le Prince Charmant in Cendrillion and the Chevalier in Dialogues of the Carmelites. Most recently he performed in CIM’s popular spring scenes program taking on the animated role of Arithmetic in Ravel’s charming one-act L’enfant et les Sortilèges and Hoffmann in a scene from Offenbach’s Les Contes d’Hoffmann.

With an expanded view of his future opportunities, David chose to follow up on the Professional Studies Diploma he earned in 2012 by pursuing an Artist Diploma at CIM—learning to be a more complete musician, a well-rounded artist and spending time teaching in Cleveland.  Like 98% of CIM students, studying at CIM is made possible and practical for him through scholarship support for which he is grateful.

Student scholarships are funded in part by the CIM Annual Fund. As the curtain falls on another fiscal year at CIM, members of the Development team at CIM are working hard behind the scenes to ensure that annual fund goals and targets are met to ensure that students, like David, continue to received the scholarship and other high quality academic support they need to pursue their dreams—be they in the orchestra pit, on the stage or in the classroom.

To make a difference in the life of an aspiring young musician, please make a financial gift to the fund today at cim.edu/donatenow.