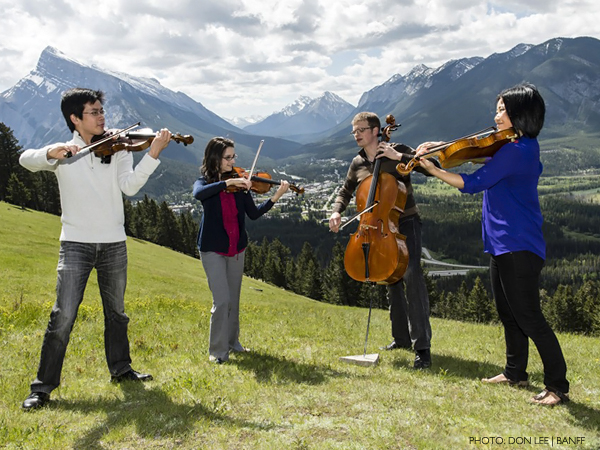 Formed in 2012 in Cleveland, the Thalia String Quartet has studied with CIM’s Peter Salaff, Stephen Rose and members of CIM’s own quartet-in-residence, the Cavani String Quartet.

The Thalia Quartet was selected to participate in The Banff Centre's three-week Residency for Pre-Formed Ensembles and the Norfolk Chamber Music Festival, studying with members of the Emerson, Brentano, Keller, and Artis Quartets in addition to founding members of the Tokyo, Cleveland and St. Lawrence Quartets. As an ensemble committed to the art of community engagement, the Quartet has presented outreach programs across Cleveland and earned the honor of returning to Banff as the 2013 BISQC’s Quartet in the Community: Melba and Orville Rollesfson Residency.

As the Quartet in the Community, the Thalia Quartet will work with some of the leading chamber musicians of our time as well as performing in unconventional and unexpected locations—atop a mountain, for example, in a park or at a grocery store—to introduce new audiences to chamber music.

“There are things you can achieve outdoors, on a street corner, or in a park that you couldn’t achieve on a stage,” said Quartet cellist James Jaffe, according to an article published on the Made in Banff blog in early July. “A lot of the inspiration for composers whose music we’re playing is from nature and the outdoors. You could, if you wanted, make an argument that some of these pieces are better suited to a meadow.”

All expenses for their residency will be covered and each member will receive a performance stipend for the community concert and events that will be part of their demanding schedule at the end of August. They will give two or three performances per day—more than 30 total in the two-week period they are at The Banff Centre.