The art of spontaneous creation of music was once the very cornerstone of great classical repertoire, but all but faded away only during the last century. Now this musical skill is experiencing a revival by classical musicians, both in concert halls and practice studios.

In a culture where student musicians strive to perfectly practice and execute the exact notes written on a score, improvisation may seem like a counterproductive exercise. But that wasn’t always so. Beethoven, Mozart, Liszt were all incredible composer/virtuosi who often created their masterpieces on the spot in front of audiences.

The works of the early masters grew and developed as a response to the audiences for whom they played. But society changed, diverging the composer/performer into two separate professions. A lot of it had to do with notation, explained Conservatory Dean Adrian Daly.

“The written text is seen as sacred. Over time, composers became more specific on their scores, indicating exactly what they wanted,” he explained. “Originally, seeing the term a piacere on a score was not unusual. Meaning at your pleasure, it gave the performer discretion to interpret. But throughout the 18th and 19th century, you see that less and less freedom was being given to performers. As composers increased the specificity of notation, the capabilities of music notation evolved as music evolved, and as the understanding between the composer and the performer evolved.”

While composers were becoming more and more specific, technology was also changing. Scores were being mass-produced and audiences began to expect works to be performed a certain way. Recording devices also increased the demand for a permanent record of a musical experience.

As the works of Beethoven, Mozart, Liszt and others became revered, informed performers focused more on mastering the truth of the work of these composer/virtuosi legends.

“This rigidity and specificity of the score later caused a movement of rebellion in the 20th century,” Daly adds.“Composers like John Cage and George Crumb actively

sought to have performers insert themselves into works.”

For many classical musicians, however, the freedom to express themselves through improvisation is still a struggle.

“Our training engrains technical perfection,” said Jesse Limbacher (BM’13). Limbacher studied composition with Keith Fitch and guitar with Erik Mann. “We spend hours and years making sure we can play a single passage correctly. Naturally, when someone who has only ever practiced music this way is asked to do something on the spot, they become terrified.”

But experiences at CIM changed Limbacher’s outlook. He took full advantage of improvisational opportunities, attending workshops and jam sessions. He now maintains that it is important to always look to get out of your creative comfort zone and embrace improvisation. “In many ways, it’s all about overcoming that fear and being able to get closer to a more immediate, direct communication of musical ideas,” he said. 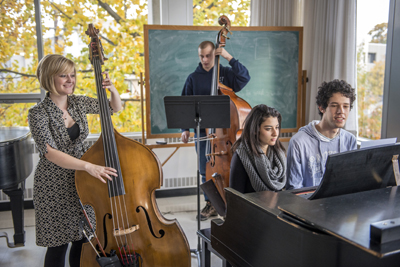 Jamey Haddad, a world rhythms instructor at CIM, agrees with Limbacher. “Students have the potential to be creative, real-time composers at the same time they are developing as orchestral players,” he said. “But there is usually a point when a student is made to feel they have to make a choice.”

Haddad is one of the world’s most prominent jazz and world music percussionists and has been at the forefront of the movement to bring improvisation into the spotlight at CIM.

“Classically trained musicians work so hard to take direction from composers and conductors that they are embarrassed to potentially sound less than great,” he continued. “They have so much invested in a piece up to that point and it works for them. They are fearful of the risk.”

In addition to Haddad’s faculty leadership in the area, Daly said that a focus on improvisation is necessary to support CIM’s mission of training the complete musician.

“The ability to listen and to respond, to think, having a good sense of harmony and counterpoint, a sense of ensemble — these are all the skills of a great musician,” Daly said. “Improvisation demands musicians bring all their skills to the table to help develop the ability to synthesize the musical material while responding to audiences and other ensemble members.”

Daly enjoys attending improvisational workshops with the world-renowned guests Haddad brings to town for lectures and world rhythm jam sessions, calling them his zen moment of the week.“The level of musicianship is just unbelievable,” he said. “They start off with something short to tune students in to their cultural style, then they add in patterns and layers and it grows from there.” Daly’s observations of these creative sessions indicate that for students, it’s their zen moment as well.

“When things start to click, and you see the students settle into a level of comfort expressing themselves, it’s a beautiful thing,” Daly said. “The more we at CIM can do to foster that, the better.”

Limbacher participated in a CIM improvisational ensemble, then coached by Bobby Selvaggio and Kip Reed. Members of the ensemble benefited from the visits of diverse guest artists, such as pianist/composer Alon Yavnai. Yavnai would teach some of his work, and then instructors and students would perform it as part of a popular pre-concert series at Severance Hall. Limbacher’s eclectic free improvisation ensemble, Contranuities Quartet, often performed for Yavnai and benefitted from his suggestions on how to view the world with their own musical imaginations, rather than the standards.

“Teachers of improvisation have to create a safe environment for students to learn,” explained Daly, who admits he himself is challenged by improvisation. “Those that sign up for the improvisation workshops already have common ground — they were all willing to sign and give it a shot. They want to learn and make music together.” 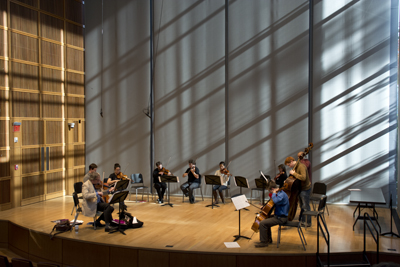 During his improvisational workshop for strings, guest violinist Mark O’Connor began with the full piece of music, showing students how to play close to the melody, deviate from it and then find their way back to the melody once more. As students became more comfortable, the demonstration evolved to complete deviation from the score, focusing more on embellishing a note or theme.

“It takes a complete approach that teaches students the history of improvised music, but also allows time for them to develop their own musical language with their peers,” Haddad said. “This is the key component to being a truly self-realized improviser.”

Both Daly and Haddad said that just like language, improvisation is easier to learn at a younger age, when a student has endless imagination and no fear of embarrassment.

Haddad describes the spontaneous composition of improvisation as having a supercharged quality of vibration, “When you catch that spirit and get kidnapped by the possibilities…there’s no turning back!”

“Improvisation has always been available at CIM,” said Dean Daly. “But it’s definitely more visible now and we’re really promoting it because we feel it’s important.” 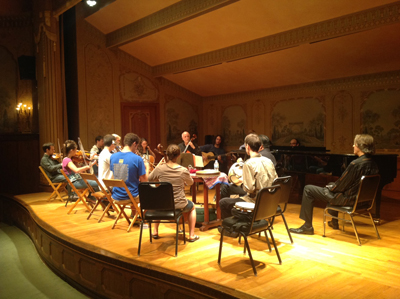 Even more exciting for students is the opportunity to learn from guest clinicians from all over the world, such as: