Sensational Scenes on the Menu this Weekend at CIM, April 11-13

Each spring, the CIM Opera Theater serves up a fresh selection of Sensational Scenes from Operas Grand and Light. For this third and final production in our 2013-14 opera series – running Friday, April 11 through Sunday, April 13 – artistic director David Bamberger has cooked up a delectable program with something for everyone!

This year’s scenes are filled with international flavor, coming from works set all around the globe – from Italy to Japan, Spain to Maine – and spanning the centuries. Regardless, many of their themes remain universal and timeless: love and loss, death and despair, hope and happiness. 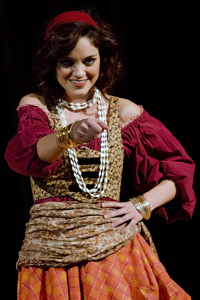 Bamberger whets the audience's appetite with a dash of comedy, courtesy of Mozart’s effervescent comedy The Marriage of Figaro, before launching into dramatic pieces from works that include Richard Strauss’ Der Rosenkavalier (The Knight of the Rose) and Leoncavallo’s Pagliacci.

A connoisseur of the operatic arts, Bamberger has been careful to balance the heavy performances with lighter fare by including songs from Rodgers and Hammerstein’s Carousel, Bizet’s Carmen and Offenbach’s The Tales of Hoffmann. He concludes this program with "You'll Never Walk Alone," an uplifting tune from the previously mentioned Carousel and the "icing on the cake."

Dual cast, as are all CIM Opera Theater productions to allow our opera students plenty of opportunities to participate as well as giving the vocalists time to rest their "instruments" between performances, our Sensational Scenes singers are accompanied on piano by musical director John Simmons.

Unlike CIM's two fully staged and costumed operas in fall and winter, the scenes production offers a matinee performance – enabling patrons eager to introduce younger children to opera a chance to do so without disrupting bedtime schedules. In fact, if you join us for the 3pm performance on April 13, you should be home in time for Sunday dinner!

General admission tickets are $20 with discounts available for students, seniors and groups of 10 or more. For more information, visit the Sensational Scenes page on cim.edu.

To purchase tickets, visit or call the CIM Box Office at 216.795.3211, weekdays from 10am-3pm. Same day tickets on Saturday and Sunday can be purchase in person at the box office beginning one hour before each performance's start time.